Lightweight 2D fractions such as plastic films and bags as well as paper and fibres tend to float up at high belt speeds owing to their low surface weight – which means they can only be sorted in low throughputs by conventional systems. All objects should also lie separately on the belt and overlapping of objects must be prevented for good performance.

This is less of a problem for applications using 3D material, since transfer of the objects onto the acceleration belt usually ensures sufficient separation. This separation process is much more demanding with light 2D components. Because these flat objects cannot be accelerated at the usual high belt speed of 3 m/s.

The usual consequence is that the speed of the acceleration belt is significantly reduced, which reduces the tendency for lifting on the belt. Although this reduction in belt speed is counterproductive – especially with respect to light 2D objects. Low surface weight in conjunction with reduced belt speed cause the potential throughput per metre of the separator's working width to further decline. Sorting then becomes uneconomical on aggregate due to the large working widths required.

The redesigned Active Object Control of the UniSort Film controls the way in which the material behaves on the conveyor belt and in combination with intelligent sensor-based technology thereby guarantees a high capacity and sorting reliability at up to 4.5 m/s belt speed. It therefore meets very stringent requirements in one of the most difficult sorting applications.

If the previous models pushed back the boundaries of what was possible at the time, the EVO 5.0 model generation is now synonymous with consistently advanced development focussing on high availability and operational reliability. This is also true of the UniSort Film EVO 5.0 and enhances performance long-term in daily operation.

The five most important new features of the UniSort Film EVO 5.0 at a glance:

A whole host of detail improvements in maintenance have been adopted from the UniSort PR EVO 5.0 sister model, such as dynamic calibration and automatic white balance. The complete solution for 2D sorting also offers new belt coverage, making it easier to access machines with minimum downtimes. Service hatches and ventilation plates are easy to reach and clean from maintenance access points. This ensures a high level of sorting purity in the long term, while optimising personnel management.

A targeted airflow right at the beginning of the sorting process – before the material to be sorted reaches the conveyor belt – ensures an even, overlap-free distribution of objects over the complete belt width. Synchronising the flow with the belt speed - This means both the belt and the air surrounding the objects are travelling at the same speed - ensures a stable position on the belt, thereby enabling material to be detected and sorted reliably via the high-resolution hyperspectral imaging (HSI) technology. A specially developed sealing airflow makes sure the 2D objects are held in an ideal position and sorted reliably, even after leaving the belt. This unique design produces an air circuit that reduces emissions while ensuring resilience.

In addition to these more complex applications, the UniSort Film can of course also be used for all typical NIR applications in the field of sorting plastics or plastic mixtures, the sorting of substitute fuels or in the green waste / waste wood sector. The UniSort Film is generally available in working widths of 1,000 mm, 1,400 mm, 2,000 mm and 2,800 mm.
A combined system is also available, which also provides the system with colour information in the visible range (VIS range) in addition to pure detection using NIR. This means for example that PET bottles can be sorted by their colour, or even milk bottles and paper. 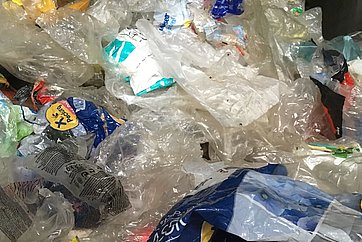 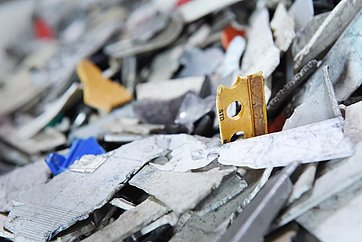