The STEINERT XTS x-ray sorting system is used for dry density sorting in the lower grain size range. This sorter is based on our proven STEINERT XSS® T EVO 5.0​​​​​​​ sorting system, but offers special modifications particularly coordinated to the sorting of very valuable goods like diamonds. A transmissive procedure detects material-dependent differences in the absorption of x-rays then classifies and uses them for sorting into density classes.

A vibration conveyor is used to carry the sortable material on an acceleration belt, which breaks the supply flow down in the supply direction thus achieving material separation. The feed material is transported through the scanner area in a resting position on the conveyor belt, whereby the x-ray source is positioned below the conveyor belt and radiates a narrow area of it. The proportion of radiation not absorbed by the material is measured by detectors in the beam above the conveyor belt. The variation between initial and measured radiation can be used to reveal differences in density between or within individual objects. Each individual object is subsequently classified according to application-related criteria. Should the decision to sort be positive, the relevant object is deflected from the discharge parabola using a short, targeted blast of compressed air. Since this machine is conceived for use in the fine grain range from 4 to 100 mm, the discharge is realised using a blast of compressed air via a downward-pointing valve manifold. The system has a valve manifold with double the number of valves and a correspondingly higher resolution for use in fines.

Resilience and high availability characterise our well-balanced scanner unit, which as a closed system has an internal cooling circuit. The high service life of the x-ray source means you benefit from the comparatively low maintenance costs for this sorting system. 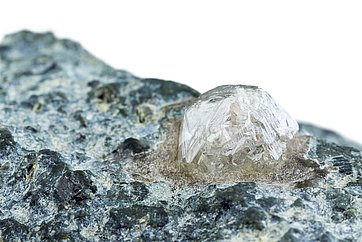